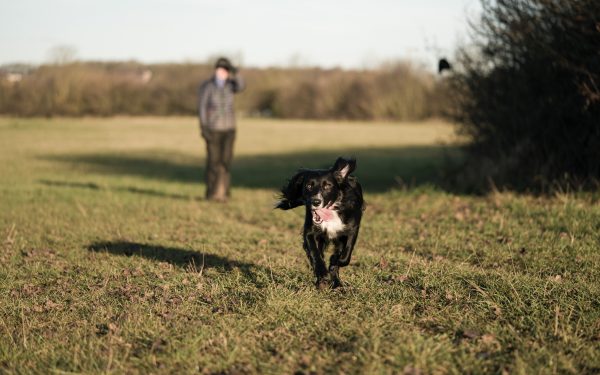 We were out with the dogs this morning and I took a series of shots of our spaniel Lou running towards me. I haven’t cropped them so you can see her getting larger in the frame. She is a racing snake so the camera really had to work to keep up!

Shots of animals, humans, cars etc coming directly towards you are the most difficult for the camera to get right as there will always be a little time lag with the camera focussing on where the subject was, not where it is as the shutter is pressed.

Today was the first time I had the opportunity to test the animal eye focus of the Sony A9ii. It’s blisteringly fast and I was really impressed, the camera nailed more than 90% of the shots.

I got Lou to do several runs towards me and the camera only missed a few shots, the rest were spot on. I set the camera to centre focus medium rather than tracking wide as I was kneeling down and the camera kept finding a bush or tree as Lou wasn’t moving but when I put the focus square on her it picked up the eye straight away.

Settings used today were AFC, Aperture priority F5, ISO 500 and high burst rate. I chose Aperture rather than Shutter priority as the sun was blazing down and the shooting speeds were well over 1/1000th sec each time and I wanted a good depth of field to help the camera nail the focus.