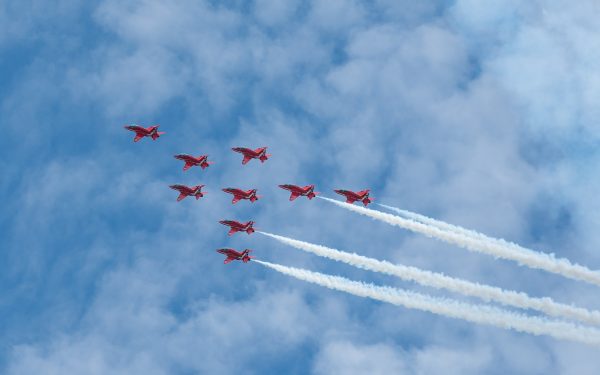 On Sunday we were at the Cosford Air Show 2019. We’ve had the Sony cameras for a while now but this was the first opportunity to really test them at high frame rates with very fast moving subjects.

Sony A9 and Sony A7iii review

This ISO on both cameras was 320 as it was a day of cloud and then sun and we wanted to keep the shutter speed up to get blur free photos.

I couldnt believe it but I filled the card just before the last aircraft completed it’s display and I didnt feel that I was overly trigger happy. Anne had a 64gb card in both slots and took just under 2000 images.

Sony A9 and Sony A7iii focussing

We were right at the front of crowd line so as close to the aircraft as it was possible to get.

The ability to track and lock onto fast moving subjects on both Sony cameras is nothing short of amazing.

I would say that we easily had a 95% hit rate and the other 5% was down to operator error not getting the camera at the right place at the right time!

We also have the Sony A7R3 but the much larger file sizes would have burned through our cards at twice the speed and taken a huuuugggge amount of time to download so we left that one at home.

For me, having 20fps was fantastic but did I really need it for the airshow, probably not.

If we go again I will probably reduce that to something like the 10fps that Anne was shooting with which was more than adequate. I toyed with shooting the day in Jpeg but at heart I’m a Raw shooter and having that extra ability to brighten shadows and reduce highlights is so useful when shooting against a lighter background.

The other thing we both learned was to shoot more video at the airshow! Photos are brilliant but the sound of a Spitfire or a fast jet you get with video is awesome.

We went there primarily to speed test the cameras for photography but both sneaked a bit of video in as well.

I shoot video professionally and normally shoot 1/50th sec and use filters if necessary for my paid work but with the speed of what was happening on the day I just stayed in Aperture and pushed the video record button when I wanted a bit of footage. I didnt expect it to come out so well but wow it’s brilliant!

Some of the video footage was shot at stupidly high shutter speeds 1/1000th and above and still looks fantastic, sharp and clean.

Trust in the equipment

I’m a professional photographer, videographer and drone pilot. I shot Canon for about 12 years then moved to Panasonic Lumix for a year or two before selling everything and making the jump to Sony mirrorless about 12 months ago. These cameras are fabulous and I don’t regret my decision for an instant. The overall reliability is top notch and as a professional photographer having trust in your kit is paramount!