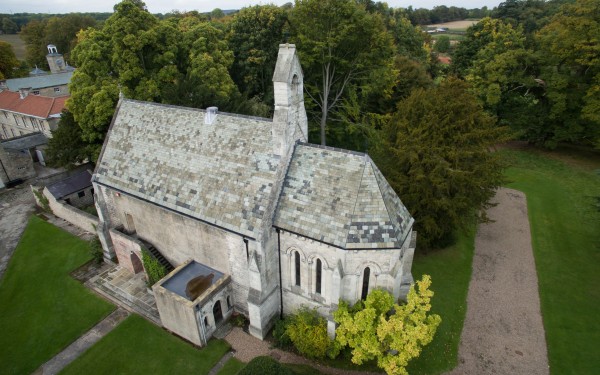 I’m a professional photographer who does both ground and aerial photography. I have 2 drones in my “squadron” and both shoot 4k video and high definition stills.

I normally shoot with the DJI S900 which is a large 6 armed drone that supports a Panasonic GH4 digital SLR in the gimbal below (see my blog Panasonic GH4 for a review on the camera) but last week we also added the new DJI Phantom 3 Professional which is an excellent addition and a great back up to the large aircraft I fly.

Nick Brooks from Martin-Brooks Roofing Specialists (www.martin-brooks.co.uk) asked me to take aerial photographs of a large prestigious project they are working on at a stately home near Rotherham.

Nick and his team are repairing or replacing the roof on the main hall, a stable block and a chapel in the grounds.

I met Nick on site and spent an hour or so taking a variety of photos at different heights and angles.

The advantage of having the client with me was that I could show him all the photos I was taking in real time and he could approve them on the spot so he know he was getting the images he wanted straight away.

At the moment there is a lot of scaffolding around the main hall but this is due to come down in the next few weeks and it is planned for me to return then to do a further series of aerial photographs of the finished project.

I am CAA (Civil Aviation Authority) approved for aerial photography and fully insured too. I’m based in the Sheffield area but travel nationally as required by my clients.

If you click on any image it will expand to show the full size and you can then scroll through the other photographs.