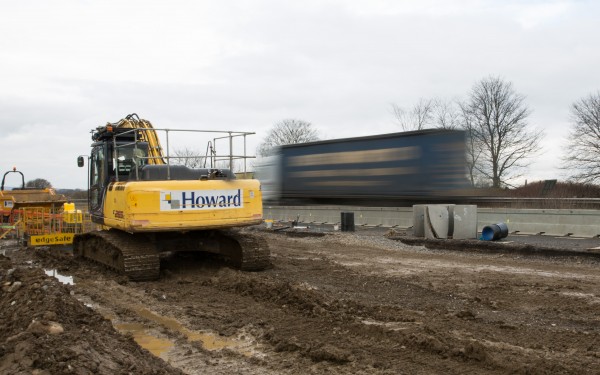 Footprint Photography is a registered and approved air operator within the CAA guidelines for UAV (Unmanned Aerial Vehicles) or drones as they are more commonly known.

On Wednesday of last week we were tasked to do ground and aerial photography / videography for one of our clients, a Civils / Construction company. The site was in North Yorkshire for the new 15 mile stretch of the A1.

We had been watching the weather as it has to be “decent” and within certain parameters to fly the drone safely. We had a 2 day window which was Wednesday and Thursday. We opted for Wednesday as Thursday on the weather forecast was supposed to be high winds and rain.

We did the right thing because when we arrived on site at 10am on Wednesday the weather was ideal for flying the drone.

Safety on site is paramount so after a comprehensive site / safety brief and being kitted out in full PPE (Personal Protective Equipment) we were introduced to our escort who stayed with us all day and  drove us to several areas of operation so we could get the photographs on the ground before taking to the air.

The ground photographs were shot to a plan from the client but the aerial work was left to our discretion on what to shoot in the areas we had been shown on the map.

We had to make sure that the areas we intended to fly were safe to do so and that our separation from site staff, members of the public and plant machinery was within the CAA guidelines.

After checking the aircraft before flight and doing handling and failsafe (come home) checks once we were airborne we began our work.

Flying a drone commercially is both testing and very enjoyable at the same time. The artistic skills for aerial photography and videography, while similar to those on the ground, have the added challenge of flying the aircraft safely to get the shots you and your client want

Because of the challenging nature of this job and the safety aspects associated with flying a drone on a construction site with so much heavy plant I want to say a huge thank you to David and Mike Partington from Exact Image in York for coming along to help with this task. David has the same CAA qualifications that I do so we both knew exactly what was required and this worked wonderfully well